How dating changes as you get older

Note from the editor: The world would have you believe that love belongs to the young and beautiful… if you’re a woman. Find someone sooner rather than later or your time will “run out.” Your looks will fade and you’ll gradually become invisible. But if we’re also told that there’s a lid to every pot, that there’s someone out there for everyone, how can this be true? I recently asked our contributor Jessie Stratton to answer that question. Are these terrifying notions true or outdated? As technology continues to change the way we connect, what does dating and finding love look like today in your twenties vs your thirties or beyond?

Many people believe that it’s more difficult, perhaps near impossible, to find love as we get older. I’ve found that this idea is not only untrue, it might even be the opposite of what we’ve been led to believe. Dating in general has its challenges, but does it actually get easier with age? Speaking to women in various stages of life has given me perspective on what it means to define one’s identity, take chances, and, ultimately, find contentment as you get older.

Alex, 23, first picked up Tinder after a breakup with a man she’d been dating. As a member of the LGTBQ+ community, Alex found herself wanting to explore her attraction to women and thought a dating app would give her that chance. “The LGBTQ+ community flocks to dating apps like flies to sun-warmed sugar,” she says, because it’s harder for them to meet one another, especially in rural areas. Tinder gave Alex more chances to meet people, but her encounters weren’t always pleasant.

When Alex pursued men on the app, she found their responses to be highly sex-driven. “It was rare to find a man who was serious about emotionally connecting… the whole thing just felt hypersexualized,” she says. On the flip side, she was surprised at so many straight couples “looking for a third, frisky partner for a threesome.” It was disheartening to feel like people weren’t interested in a monogamous committed relationship. Alex also experienced a different kind of letdown; being of Algerian, Spanish, and Irish descent she found that her “Algerianness became a weird thing that people liked to exoticize on Tinder. People would always say ‘You’re so exotic; what are you?’ It was loosely-disguised fetishism.” Despite these negative encounters, Alex saw some benefits of using dating apps.

She met her current partner outside of Tinder but tells me, “I’ve made more LGBTQ+ friends from Tinder than partners, which was really important for me in the development of my sexuality. They shaped me.” Alex, like others in their twenties, experimented, tried something new and was shaped by her experiences. When we learn our identity takes shape and we move on with a solid foundation of what we’re looking for, which helps when you’re looking for love in later years.

The Thirties: Dating With Confidence

I’ve never used a dating app. I’ll be honest; I used to think they couldn’t produce serious relationships, but that all changed when my brother met Mollie. At the request of her friends, Mollie, 31, first picked up Tinder three years ago after the end of a long-term relationship. Though “out of practice” with first dates, Mollie felt empowered using the app because she got to choose who to connect with. She also knew herself and what she wanted, having learned from dating in her twenties. “I was so ready for the real thing—lifelong partnership, kids, driving a minivan, the whole sha-bang—that I didn’t want to scare guys away.” Even so, she had no trouble matching with different men. “Luckily for me, I had wonderful interactions across the board with the guys with whom I chatted,” she says. Mollie deleted Tinder in the same year that she picked it up after meeting my brother. After all, dating apps only connect you to others; the rest is up to you! Now that she’s older and happily married, she thinks the best way to form meaningful relationships is to simply be yourself. “Don’t play the game! Be honest and upfront with what your expectations are from the beginning,” she advises others.

Although Simone (name changed for anonymity), 35, married the man of her dreams a couple of years ago thanks to a friend’s introduction, she used to use eHarmony. There were no like-minded men at her workplace and she hoped that online dating would expand her network, just as 23 year-old Alex wanted. She says, “I tried to present myself honestly and accurately. The goal was a successful long-term relationship and I did not want to represent myself as anything other than who I am.”

For her the best part about dating in her 30s was how confident she felt in who she was as a woman. Though eHarmony didn’t blow her away, she says, “It was less about the platform and more that none of the men I matched with were what I was looking for.” In the end, she didn’t find a good fit through her matches, but, similar to Mollie, Simone knew what she wanted, so it didn’t feel like a loss.

The Forties: Building on Self-Love

Angela, a woman in her 40s, finds that dating apps offer her easy and fast ways to connect with a variety of people. She downloaded Bumble and Hinge after deciding to be more intentional with her dating life. Angela enjoys using the apps because it puts her desire into her own hands, but, of course, it’s not a perfect process. “It can be frustrating and time-consuming,” she says.

Angela has no problem matching with potential partners, but finds that connecting with men is hard because of their attention spans. She adds, “we all do, which is why I think the dating apps make dating a bit harder. With so many options, it seems we lose focus and interest quickly but to me, those just aren’t your guys if they don’t stick around. So, the sooner they vanish and not waste my time, the better because I know they’re not the one.”

Angela used to feel pressure to find a partner. “It’s a reality to most of us that it’s not as easy as it was before to find your person,” she says of growing older. But rather than see it as time slipping by, she focuses on self-love and self-empowerment, which has greatly benefitted her as she navigates the dating landscape. She adds:

In your 20s and 30s, sometimes we put men on pedestals, and we approach dating as if we’re waiting to be chosen. It’s such a scarcity mindset. Now in my 40s I see men as just as vulnerable and imperfect as women are. I no longer wait for a man to “like” me. It’s about whether “I” like him or not. I feel so much more empowered and in control over choosing the right relationship.

It’s not always easy to love yourself and find fulfillment, especially when society says you should have it all together early on or you’ve missed your shot. But Angela’s story reminds us that this is not the case. “I believe with age you have greater confidence to show up as unapologetically you,” she says. For women who are getting older and thinking about dating with an app, give it a shot. “Don’t give it too much thought. Work on empowering yourself and loving yourself at any age before you start dating so that you attract and accept who you value yourself to be,” Angela advises.

In your 20s and 30s, sometimes we put men on pedestals, and we approach dating as if we’re waiting to be chosen. It’s such a scarcity mindset. Now in my 40s I see men as just as vulnerable and imperfect as women are. - Angela Click To Tweet

Bonnie, 49, also found joy and love through a dating app; she downloaded Tinder for the same reasons as these other women: to meet new people. “I think [apps] help you meet people you might not meet otherwise,” she says. When she dated in her 20s, it was easy to meet single people, but most of them were just looking for a fun time, nothing serious. “Dating in your 30s usually means you’re dating someone divorced with young children, which can be tricky. Plus, people are still developing their careers. I think dating in your 40’s is easier than in your 30s. [It’s] fun because most people are established and guys seem to know what they want as they get older, which is nice.”

[You may also like: The New Rules for Dating: Stop Looking for Love]

For Bonnie, dating didn’t get harder with age. On the contrary, she made just as many matches as she did when she was younger. “Personally, I didn’t find my age to be an issue since there are lots of guys looking for a woman who does not want to start a family at this point in life and does not need someone for financial support.” She met her partner, Brian, on Tinder and they’ve been together for two years now. Similar to Angela, she loves how confident and laid-back people are beyond their 30s and encourages older women to try dating apps. “There’s nothing to lose and everything to gain.”

Love is more informed with age. The chances of finding a truer match increases as you get older because you’re more comfortable in who you are and what you want. Click To Tweet

When I began talking to these women about love and getting older, I was simultaneously looking forward to and dreading their answers. I worried that their experiences would leave me feeling like everything society has imprinted on us was true—that, in fact, there’s not much hope for finding love later in life. But I was proven wrong. From their stories I’ve learned that love is more informed with age. I’d even go so far as to say that the chances of finding a truer match increases as you get older because you’re more comfortable in who you are and what you want. So if you find yourself single beyond what society thinks is your prime, use these stories as proof that love hasn’t passed you by and that, in fact, the best is yet to come. 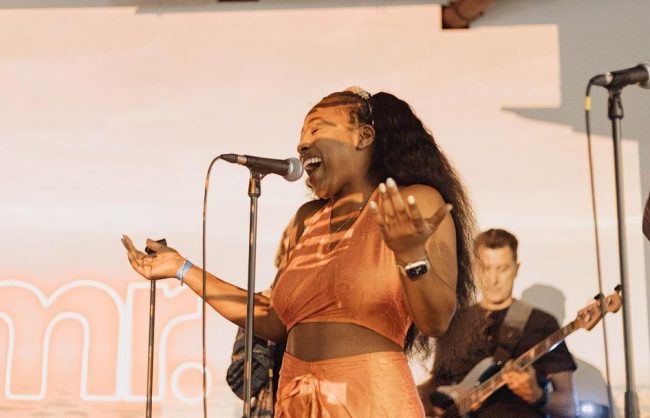