For this month’s “Hair Story” we caught up with Khay Muhammad who considers herself a Jane of all trades and a master of some. Khay currently manages New York City hot spot, Sky Terrace at The Hudson Hotel; she’s also an artist, DJ, singer and finds time to teach yoga.  With all that she does, it’s no surprise that Khay’s hair is just a versatile and ever-changing in its own right.

Growing up, I always had a positive relationship with my hair. I had four sisters so I never felt like ‘I’m the only girl and I don’t know what to do with this stuff’.  My parents were part of the Nation of Islam so my Dad was really into natural hair.  Even in the 80s, my Mom couldn’t relax our hair. Our hair ways always braided and put under scarves until I was about 12 – my older sisters, longer than that.  We were finally able to take off our scarves when my parents separated in the 90s and with my Dad out of the picture we were also able to relax our hair and style it however we pleased.  I wanted my hair to be straight and I wanted to be able to flip my hair. Growing up in the 80s and watching so much TV with images of white women and how their hair moved, really made me want my hair to also have movement. When we had the opportunity to relax, my Mom was onboard with the idea, because she was overwhelmed with taking care of five wooly-haired girls.  My Mom is half Native American and half African American so her hair is a silkier, bushier texture than me and my siblings.  She was born in 1945 so she came from an era of pressing her hair to get it straight, so for my Mom, having girls with kinkier hair than her own was exhausting when it came to having to wash and braid five heads.  I relaxed my hair all throughout my teens into high school and early college.  All my sisters were pro-relaxer girls all of their lives; however after college, I lived in NYC and in Brooklyn, and was exposed to different hair options.  I then became the first out of my sisters to stop relaxing my hair and started pressing my hair when I met my friend, Xosha Roquemore.  Xosha was big into pressing so she put me in touch with her hair dresser.  It was like a weird loophole, straightening your hair by pressing it instead of using relaxers.

This was at photo shoot in my Brooklyn apartment with photographer Kwesi Abbensetts and stylist Pamela Shepherd.  I think it was for Kwesi’s look book or for Clam Magazine, I don’t quite remember.  The inspiration behind this was 1960s beehive, Dream Girl without the wig. I’m all natural in this photo and it’s a legit beehive.

This photo was taken at a shoot for Kissa Thompson’s “I love My Hair” T-Shirt line campaign and it was either spring or fall because I was able to be outside and not freeze.  I was doing a pompadour, shaved head thing.  Before I was shaved and straight, and this was like ‘ok I’m not going to press it anymore’, I’m just going to let that part fluff up and be itself  and then I’m going to keep the sides buzzed.  At the time, I was bartending full time at Santos Party House in NYC and would see a lot of edgy musical acts perform. Really weird and cool stuff.  As a result, I got deep into the music and club scene, so I think this look was really anti-establishment. It was really punky because the entire side of my head is buzzed.

This was another photo shoot, with Kwesi Abbensetts and the inspiration was being this vain glamour girl.  I wore a lot of sequins, I had my nose ring – which was very punk rock, my hair was disheveled, but I had makeup and really nice vintage clothes on.  That was a fun day.

This photo was taken at Camp Ragamuffin three summers ago when I visited Jamaica for the first time, and worked as a camp counselor.  I left my sides shaved, but because I was on vacation, I wanted to keep the rest of my hair easy to maintain and able to get wet so I went for these long braids.  Another inspiration was Avatar!  I think Avatar had come out that year (laughs) and the braids worn by the main character in the movie really inspired this look.

This was at a shoot for the Afro Punk website that took place in the winter time.  I had just taken out my hair from being in braids and it created this cool stretched out effect. I rocked this Jimmy Hendrix-type ‘fro back and forth for about a solid year. The afro was hard though. It’s hard to maintain.

I locked my hair in November of 2011. I locked it from the afro, so I started from length and got to skip that super, super awkward phase that everyone dreads, no pun intended (laughs).

This photo was taken at a fundraiser event for Camp Ragamuffin which raised money for the last bit of supplies we needed for our next trip.  In the past I had always shaved the right side of my head (starting when I turned 25) because I wanted to metaphorically release the artistic side of myself which is in the right brain.  When I made the decision to grow it back, I still wanted to highlight that part of my brain so I just added color to it by dyeing it blonde, which I still do to this day.

I can see myself rocking locks for about a decade and really getting into it, letting them grow, shaping them or cutting them. I had a dream about myself in the future and the Khay of the future had long locks; however I don’t think locks will be my final hairstyle.  When I’m 40 and having a midlife crisis, who knows, maybe I’ll have a resurgence of wanting my hair to be straight.  My brother’s girlfriend started twisting my new growth for me but I now twist them myself every couple weeks.  I try to wet my hair every day because African American hair is like a plant.  It grows up and out and when you wet it, it just feels happier. So I spray it with water often which makes it easier to maintain.

Although I’m no longer a practicing Muslim, I have a more worldly view on how I govern my life, body and hair. The one thing that’s always important to remember is that cleanliness is next to Godliness, so no matter what the style is, it’s important to keep your hair clean from the inside out.  Hair is protein, just like your nails and how healthy your scalp is, is based on how healthy your insides are.  Eating things that are helpful to the scalp and the natural moisture of the insides I think is really sexy and really attractive.

I also feel as a woman, every month is like a rebirth.  Throughout the month we have ebbs and flows of energy and attitudes, and everything is always changing. I feel I’m a woman’s woman in a way where I’m ever-changing, so the hair thing has to move with that same feeling and maintenance is a big thing.  I’m becoming more and more holistic, eco-friendly and a smarter consumer.  When you start to see things through that lens, you eventually realize how much you’re spending on getting your hair done and what you’re spending on products and maintenance which can all be really expensive.  That said, locks for me right now, represents how much I’m willing to put into consumerism and hair care.  I want to do it myself and I know I can do it very well and so far I love it. 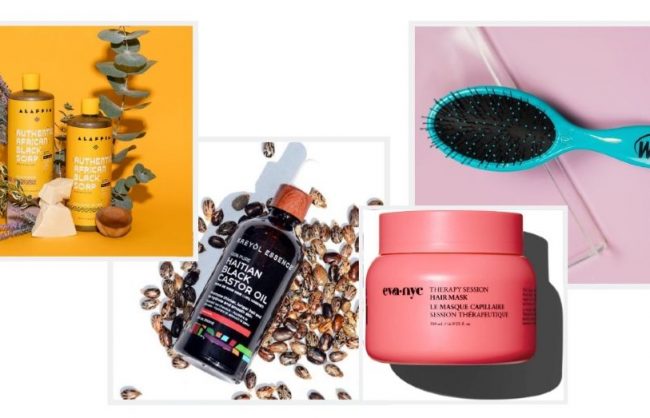 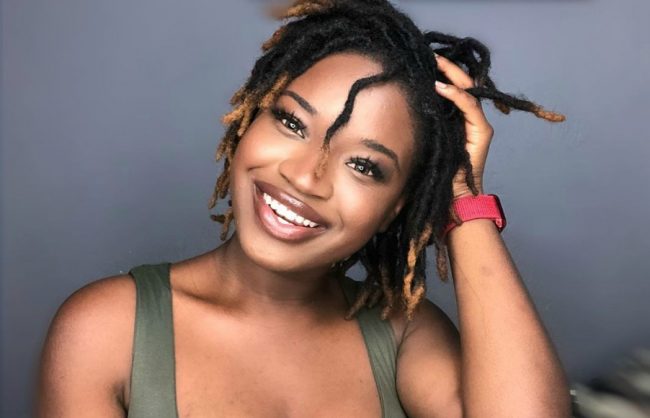 Retwisting Locs With Oil and Water