I cannot begin to explain how much I enjoyed my trip to Havana, Cuba. Cuba is a vast and interesting country, full of vibrant culture, rich history, kind, generous people and beautiful landscapes. Cuba’s capital city transports visitors back in time to the island’s 1950s glory days when Havana was known as a hot spot for gambling (much of which was run by mafia members from the United States). At one point, Havana was even known as the Latin Las Vegas.  As a photographer, I was intrigued by the so-called ‘floating casino.’ Weathered buildings, old classic cars, and the country’s history stood out as top lures for my visit to Cuba and it’s safe to say, it didn’t disappoint. Cuba’s a city photographer’s paradise.

Planning Your Trip to Havana

Getting a Visa and Flying to Cuba

We traveled with JetBlue to Cuba and flew into Havana. Like the airline explains on its site, you have to have one of two licenses to travel to Cuba from the US–a specific license or a general license. There are 12 types of general licenses, one of which includes “Support for the Cuban people.” If traveling on a general license, you’ll need to purchase a Cuban tourist card. We purchased ours from JetBlue for $50 at the airport before we left the United States. You’ll need the following items in order to get your JetBlue Cuba visa:

Don’t plan on booking a hotel when you visit Havana because there aren’t many; most visitors stay with locals. I booked a place on Airbnb. You can easily find a room in a house for around $100 per night. The lack of traditional hotels in Havana might take some getting used to, but staying with locals adds to the authenticity of the experience.

How Much to Budget for Havana and Bringing Cash

Before putting together a budget, it’s important to understand the Cuban currency (of which there are two) and rate changes, which are roughly:

I suggest budgeting $90/day for two people, which pretty much takes care of all your meals for the day. We had a separate budget for getting around. See below.

As mentioned, US debit and credit cards won’t work in Cuba so you’ll have to get cash (read this in-depth article on bringing cash to Cuba). If you want to bring cash, do NOT bring in US Dollars, as you’ll be charged a 10% conversion fee. If you’re not an American and do not have a bank that’s affiliated with the USA, I suggest having a couple hundred Canadian dollars, or Euros or Pounds on you as backup. Also, note that Australian dollars are NOT accepted. The best currencies to bring into Cuba to convert over to CUC are Canadian Dollars, Euros, Pounds and Mexican pesos.

Getting to and Around Havana

With wifi being scarce and a hassle to find and use, knowing how to get around beforehand is essential. Taxi was our mode of transport of choice. Our Airbnb host got us a driver; we negotiated the price and he picked us up from the airport. We used the same driver during the entire trip, spending about $90/day on 24-hour car service.

The Best Photo Spots in Havana

There’s so much to do and shoot here. There are locals hanging out, vendors selling foods and other items, dozens and dozens of shiny, colorful old cars, and often live outdoor entertainment. You’re very close to the Gran Teatro de La Habana (shown above), which has just been beautifully restored and is in itself a great photo op. Try to go inside, and capture the details and grandness of this art space. Just up the street from here is Cuba’s capitol building. It’s been under construction, so as of the time of this post, be prepared for scaffolding.

La Guarida is a restaurant in an old beautiful townhouse built in the early 1900s. Book dinner reservations (the restaurant is very popular) for about one hour after sunset. Get to the neighborhood about two hours before sunset—all of the surrounding blocks are a street photographer’s paradise! About 45 minutes before sunset, head into the building and you’ll find beautiful architectural scenes and details to shoot. Head up to the rooftop open-air bar about 30 minutes before sunset, have a relaxing cold drink, and get ready to shoot as the sun sets on the city of Havana. Tripods are allowed. Oh, don’t forget to stay for the blue-hour!

At first glance, you might think you’re in Washington D.C. Havana’s former parliament, the Capitolo, was copied from it’s US counterpart but is actually bigger. It is an iconic photo stop on any trip to Havana, with dawn providing the best light of the day. Inside is now a museum and is well worth a look. You can have a personal guided tour for about $2 and there are no restrictions on photography. It can be quite dark so you’ll need a fast lens and or a high ISO. Take a good wide angle to capture the inside of the magnificent dome. The Capitolio is a short walk from Parque Central.

When in Cuba you have to try a Cuban cigar, and the best way to do so by far is to take a day trip to Viñales—a beautiful valley of Cuba most known for its sprawling tobacco fields and mogotes (isolated hills). It’s just about a three-hour drive West of Havana. Our driver took us there and brought us right back. In Viñales, we got to go horseback riding, visit a cigar farm and roll genuine Cuban cigars.

The cigars in Viñales are better and are said to be more organic than those in the government-run stores in Havana. Save your money for Viñales, where the money you spend on buying cigars will go directly to the people who actually grow the tobacco.

Photographing Locals and What I Learned

The Cuban people are incredibly photogenic. The mixture of ethnicities—from African, Caribbean Indian, to European and even Chinese—has created a melting pot of diverse and unique looking people. Mix this with the incredible hospitality and vivacity, and you have the recipe for some great portraits. Cubans are very approachable and almost always happy to have a photograph taken, but do have the courtesy of asking them first. Cuba is a very poor country and you will find that more often than not you will be asked for money. Whether you pay someone for a photograph is entirely your decision and you generally will not be pressured.

In speaking with locals I learned quite a few things about the country that don’t get surfaced with the romanticized depiction of Cuba. For example, Food in Cuba is produced and distributed through a socialist system. Cubans have un Libreto de Abastecimiento (meaning “Supplies Booklet” or ration cards) that allows them to get a certain number of products per month. These monthly rations do not include items we take for granted like soap, toilet paper, and tampons. The rations have also gone down significantly over time and are oftentimes not enough to feed a family.

You may have heard about Cuba’s remarkably low crime rate. It’s true; violent crimes against tourists on the island are pretty rare and the country is very safe. This is in part due to the fact that the Cuban people are incredibly good-natured, hospitable and friendly, but it is also because the punishment for committing a crime against a tourist outweighs the punishment for most other crimes. Of course, this is a great thing for tourism, but it does also hint at a twisted system that cares more about income from the tourism industry than its own people. 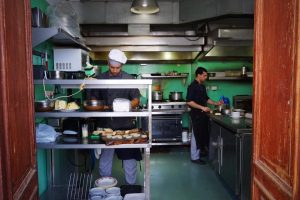 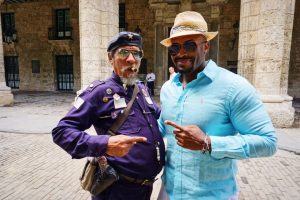 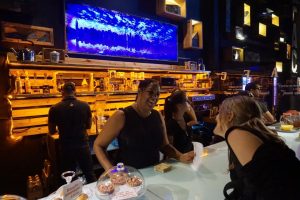 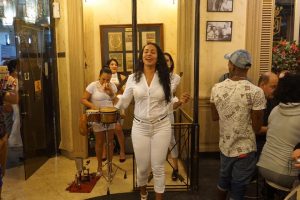 Whether they are a doctor, nurse, lawyer or engineer, the average monthly salary for a Cuban is $20. This is set by the government as a standard. The exception to this rule is cab drivers. Cab drivers in Cuba make significantly more money than trained doctors or engineers because they have private licenses provided to them by the government. Their salaries are not set by the state, meaning that they can charge tourists high prices (like the $25 to go from the airport to central Havana, which is more than the average monthly salary). This means that highly skilled and trained Cuban people are forced to do remedial jobs like drive cabs and wait tables.

Cuba’s problems are incredibly complicated. The lift on the travel ban that prevented Americans from entering Cuba does not signify a complete and total victory. It only signifies a small step towards (what I hope will be) a bright future for Cuba. Through some combination of internal reformation, elimination of “El Bloqueo” (the blockade) and increased tourism, I pray that we see this future unfold in our lifetime.

But in the meantime, visit Cuba responsibly and armed with knowledge. Soak up every bit of beauty and culture the country has to offer and get to know the amazing, resourceful and resilient people that live there. They truly make Cuba the beautiful place that it is. 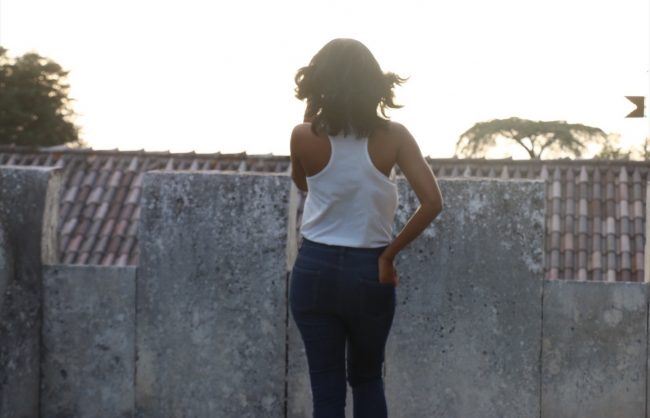 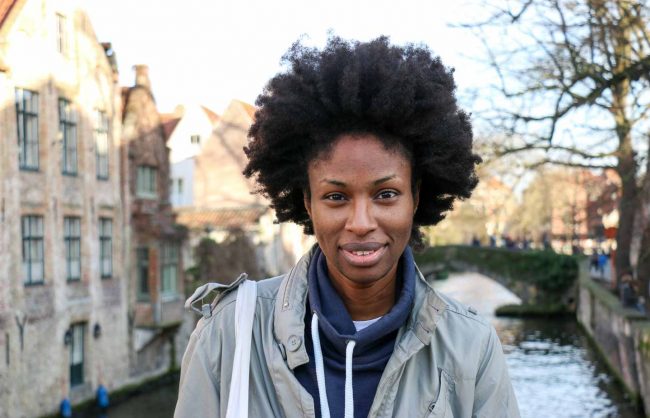 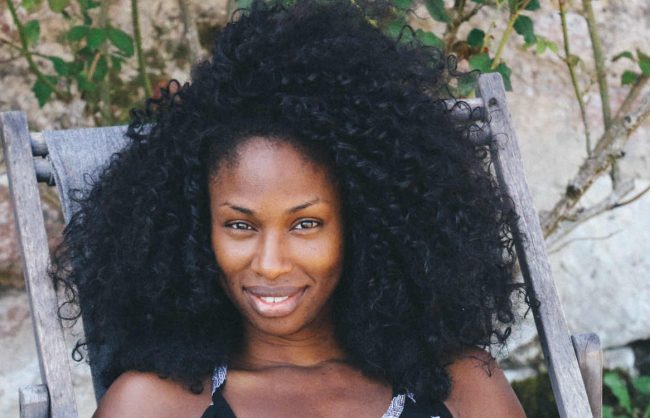 Un-ruly Life: The Other South of France 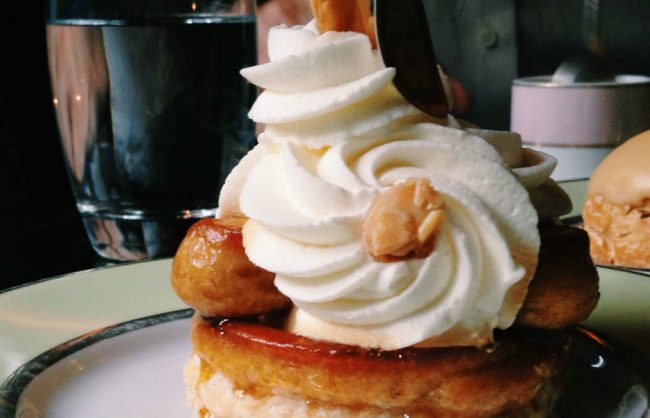