We usually see what a society deems beautiful in art–Davinci’s Mona Lisa, Botticelli’s Birth of Venus. So I visited the Musée du quai Branly in Paris to see their extensive collection of African and Oceanic art, to learn a bit of our pre-middle passage history and to try and infer what ancient African cultures considered beautiful. Given the Western world’s ultra narrow definition of beauty, which often excludes or over generalizes Black women, I wanted to see how we represented ourselves in the past.

I quickly found out that a lot of African art, particularly sculptures, were created to serve a spiritual purpose. I came across these Baoulé figures that played an interesting role in Baoulé culture.  After my visit to the Branly, I did a bit more reading about them. 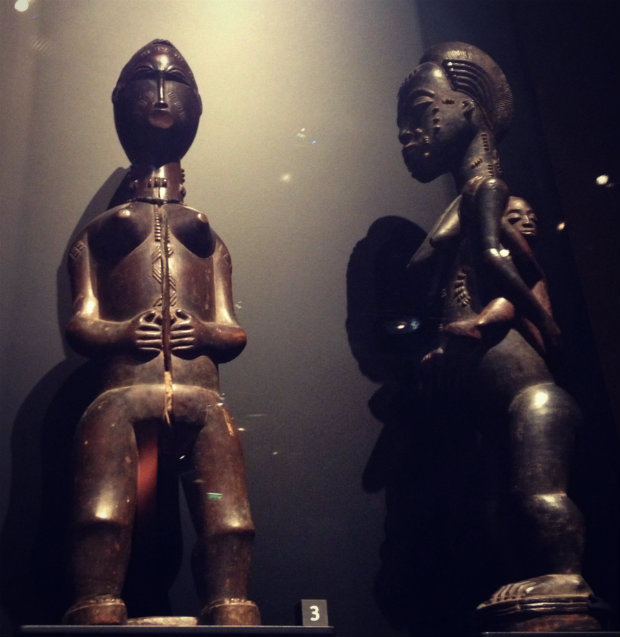 A little background: The Baoulé people are a sub-group of the Akan people. The Akan currently occupy the southern regions of Ghana and the Ivory Coast. Famous modern day Akans include, everyone’s favorite sex symbol Idris Elba and the venerable Kofi Annan.¹ The Akans marked their place in African history as being able to resist colonial defeat the longest out of any West African peoples.²

The legend surrounding the origins of the Baoulé Akans is a poetic one with a female protagonist. There are various accounts of the legend. I’ve drawn from Wikipedia and Zyma.com: Abla Poku, queen of the Baoulé, fled Ashanti rule in Ghana, leading her people to the Ivory Coast. They came upon the uncrossable Comoé river, where they began throwing in their most valuable possessions to appease the river’s spirit. Once the Queen realized her people’s efforts were not enough, she offered her most prized possession: her son. With this offering, hippopotamuses rose from the river and allowed them to cross. After losing her son, the queen was so overcome with grief that all she could say was “baouli,” which means son is dead. From then on the queen and her people were known as the Baoulé. 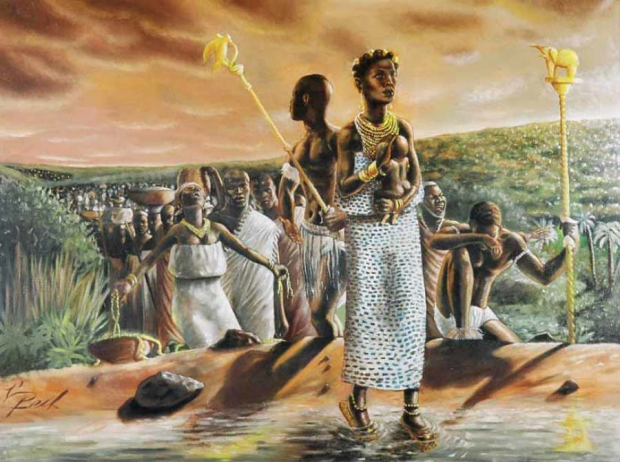 The story surrounding the Baoulé’s origins, colorful and beautiful in its account of one person’s pain for a greater good, offers insight into its people’s culture. The people were led by a woman. Per Wikipedia, “Baoulé political organization is matriarchal and women’s rights are very sacred.” The Baoulé also have a very strong connection to the spirit world, bloblo (“the village of truth”), which, according to the Metropolitan Museum, connects and determines the fate of the living. This brings me back to the figures I stumbled upon at the Branly.

Divination figures such as these serve as links to the spirit world and are a critical element in a Baule diviner’s professional practice. Baule diviners are individuals who have been selected by spirits, or asye usu, as mediums through which to communicate important insights into the human condition. The sculptures are often described as the asye usu’s “stool,” a figurative resting point for the spirits. Divination figures represent idealized male or female figures in their prime, which are considered by the asye usu as desirable forms to inhabit, and so are used to draw the unruly spirits out of their home in the bush and into the village.

Through a bit more reading, I learned that often times the asye usu (also spelled asie usu) were a source of discord between spouses because in Baoulé culture, every man and woman has a spirit wife and a spirit husband, respectively. When the spirit spouse feels neglected it drums up trouble between the human husband and wife. The divination figure is used to appease the spirit by first providing it an attractive “abode” to reside in in the husband and wife’s house. The attractiveness of the statue is important to the asye usu, which is usually known for being extremely ugly. The spirit is further appeased with offerings.³

Given the importance of aesthetics to the asye usu, one has to ask what was considered beautiful by Baoulé standards. Some critics have weighed in on this and surmised that the smoothness of the figure is a factor, representing the elasticity of skin present in one’s youth. Scarification on the statues and styled hair was also important, being that they are indicators of being socialized–of belonging to the village versus the bush. A big head was a sign of wisdom and a long straight neck was a sign of being able to work hard and carry a heavy load (on one’s head).³  All that to say that youth, like today, was attractive but also being part of the community, physically able and smart was attractive too. It seems that beauty was more linked to survival and ability than just surface features. 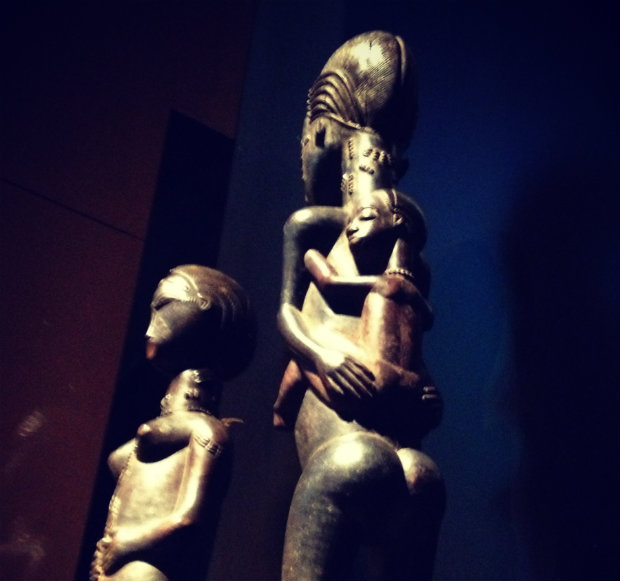 It’s normal to get caught up with what lies on the surface of a human being. An appearance is the first thing we see; it makes up a large portion of a first impression. Of course we’re told to look inside a person to find their appeal. But what does that really mean? Beauty is kindness and selflessness and humor–personality traits that are typically regarded positively. But the Baoulé are now making me consider practical ability. I’ve gotten many a talent crush on people because they’ve been able to create something useful or beautiful or meaningful. A person’s output versus their outward appearance says volumes about who they are. My mom has always said, what comes out of a man makes a man. What a person produces and puts into the earth is a true sign of what lies beneath his or her surface. So when we’re measuring others and measuring ourselves, it’s important to factor in the things you’ve done, the things you’ve produced because those things make up a bigger part of your image and a more critical part of your story.